Devizes School has won praise from Ofsted in a recently published report. Following an inspection in March, Ofsted determined that the secondary school and sixth form college was a
‘good’ school, having improved since their last visit in June 2015.

Devizes School achieved its ‘good’ classification almost four years ago. However, in recent years, changes to what constitutes a ‘good’ school have made achieving the rating more challenging, which demonstrates the improvement the school has made since its last inspection to maintain this status.

Phil Bevan, Principal, said: “We are incredibly proud of our school and delighted that this excellent Ofsted report accurately represents what we see every day in school. We remain fiercely ambitious to go from strength to strength, and we will continue to focus on improving teaching and learning, behaviour, student outcomes, and the gap between disadvantaged and non-disadvantaged pupils.”

In February 2017, Devizes School joined The White Horse Federation multi-academy trust. The decision was widely supported by stakeholders, and the report evidences that it has proved to be a beneficial move. The report reads: “Middle leaders, governors and representatives of the multi-academy trust (MAT), to which the school belongs, are united by a common purpose. They ‘pull together’ to implement whole-school strategies for improvement.”

Ofsted also says: “The school has benefited from the support provided by the MAT. Staff now work closely with colleagues from other trust schools to improve the transition from primary to secondary school.”

The Ofsted inspectors were quick to highlight the school’s positive atmosphere and the high morale of its students, writing in the report: “The school is a welcoming, inclusive place where pupils learn to become tolerant, accepting young people. They are polite, articulate and personable. Pupils who spoke with inspectors reported that they valued their school experience, in large part because of the positive relationships that they share with staff.”

The report also praised the school’s principal and senior leaders, saying: “The leadership team has maintained the good quality of education in the school since the last inspection. Since you [the principal] took up post in April 2016, you have raised the expectations of staff and pupils. You are ably supported by other senior leaders, who share your ambition to improve outcomes for all pupils.”

The praise from Ofsted comes as Devizes School is finalising its 50th anniversary celebrations, which include a free reunion event taking place on 12th October. 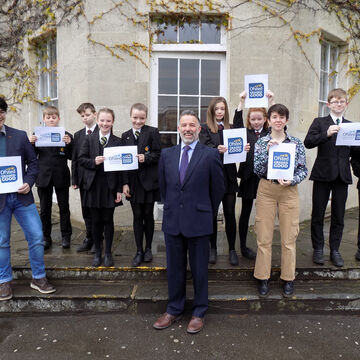